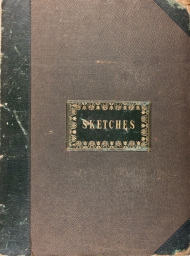 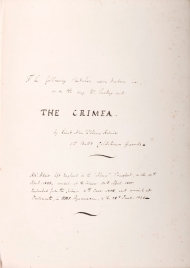 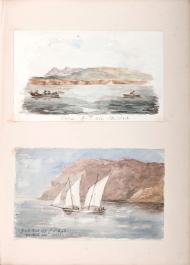 ‘Camp and part of the plain Balaclava / from the harbour’ (verso). 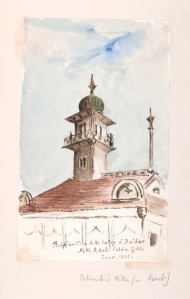 ‘Crimean Fountain, AWA / Fountain in the Tartar Village of Varnutka / between Kamara and Baidar’. 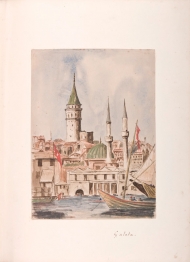 ‘Scutair from the Golden Horn’.

‘Carrying wounded out of the Quarries / A. W. Adair / Coldm Gds’.

Grave stone of Lt.Rodney Mitchell, Royal Artillery ‘About 200 yards north of the Windmill, at the entrance to the Careening Bay Marine / A. W. Adair Coldm Gds / 2 Nov 1855’. 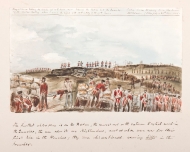 ‘Flag of Truce to bury the dead of 18th June 1855. Between the Redan and the Quarries. Taken from memory from the corner of the mortar battery where I was on the night of the 18th and day of the 19th June. A W Adair Coldm Gds. 20th June 1855 / The furthest white flag is on the Redan, the nearest on the extreme English Works in the Quarries, the men near it are Highlanders, most of whom were now for their first time in the trenches; they soon discontinued wearing kilts in the trenches’. 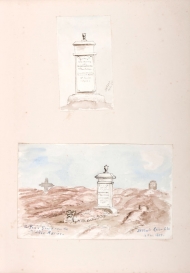 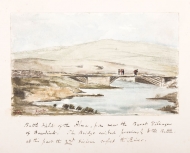 ‘Alma / Battlefield of the Alma, from near the Burnt Village / of Bourliouk (sic). The Bridge existed previously to the Battle. At this part the 2nd Division crossed the River’. 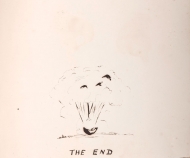 ‘The End’; an exploding canon ball or mine. 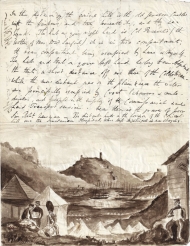 A letter from Adair to his mother dated 18 May 1855, Balaclava, with details and ‘… the Sanatariam (sic) Hospital where Miss Nightingale is now staying’.