A Selection from the Artist’s Estate
.

“I remember arriving in West Berlin at the Brandenburg Tor on the 13th August 1961, the morning after the night before – the East Germans had closed off East Berlin overnight dividing the city, barbed wire at every checkpoint. Feliks got out of the car and, with my mother Marion talking to them, sketched the exhausted trembling young East German soldiers, rifles shaking … New York, 1968, Andy Warhol’s “Factory” studio on Union Square and then scrambling into the stretch limo (my first!) to go uptown to “perform”  for the media during an Opening, and between – a drowsy (just off the plane) Martin Luther King sitting at our kitchen table.

Feliks was never without a sketchbook, taking it all down, recording, bearing witness. I was privileged to sometimes be at his side”.

NOTE: Nothing will be sold before the Exhibition opens at 6pm on Thursday 16th November.
The Exhibition continues through 22nd December. 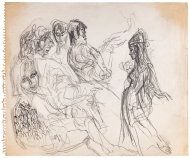 3. ‘The Establishment Club, round 2’. The Establishment Club, so-named by founder Peter Cook, was set up for the performance of satirical material intended to test the Lord Chamberlain’s censorship laws. It ran from 1961 to 1964 at 18 Greek Street. Pencil. Inscribed and dated, Jan.1962. 9.25x14 inches. £1000 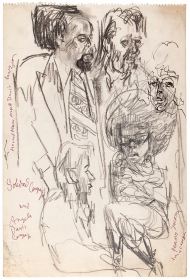 4. ‘Soledad Campaign and Angela Davis Campaign … Howard Moore, Angela Davis’s lawyer …Penny Jackson, sister of George ’. George Jackson was a Black Panther and one of the three men charged with murdering a Soledad prison guard in 1970. He was shot while trying to escape before his trial. Angela Davis was arrested in relation to the murder of Judge Haley in 1970, but acquitted. Pencil and charcoal. Inscribed. 18x12 inches. £1500

5. ‘Whores for Peace … Cambridge Communist Party’, a London demo seen from the artist’s Whitehall Court apartment, circa 1968 ’… Craftily the Police channel / split / misdirect the marchers, who aim at the rewarding route of Whitehall, into streams weaving by the Embankment, and round my stand: many hours, many miles lasting Peace demo criss-crossed and U-turned on itself over Westminster Bridge, and ‘Whores for Peace’ banner paraded – wasted before nobody-me on my doorstep…’ Lit. and Ill. Feliks Topolski ‘ Fourteen Letters’, no pagination, Faber and Faber, 1988. Fibre tip pen and crayon on yellow paper. Inscribed. 12x9 inches. £775 ● 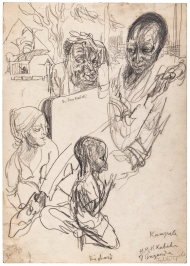 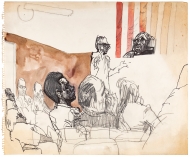 7. Defence Charles Garry addressing the Judge at the trial for the first degree murder of Police Officer John Frey by Black Panther Huey Newton, July-September 1968. It was after this trial that Garry helped initiate the model for mixed race juries for politically and racially sensitive trials. Pencil, pen, ink and watercolour. 1968. 14x17 inches. £1250 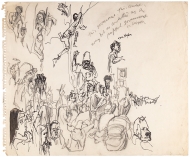 8. ‘Tom Hayden … This Government, this Convention every bit as controlled as the puppet Government in Saigon’. Tom Hayden (1939-2016) politician, anti-Vietnam War activist and husband of Jane Fonda, with others at the Chicago Democratic Convention, 1968. Pencil, pen, brush and ink. Inscribed. 14x17 inches. £1000

9. ‘First Committee 1492nd Meeting, International co-operation in the peaceful uses of Outer Space report of the Committee etc etc … This Senior Political Committee….’ The United Nations Office for Outer Space Affairs Treaty on Principles Governing the Activities of States in the Exploration and Use of Outer Space, including the Moon and Other Celestial Bodies, was adopted by the General Assembly on 27th January 1967 and entered into force on 10th October 1967. Pencil, fibre tip pen, ink and ballpoint pen. Inscribed and dated, 17.12. 1966. 14x20 inches. £1250 ● 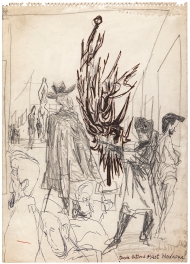 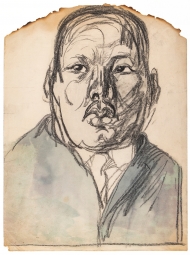 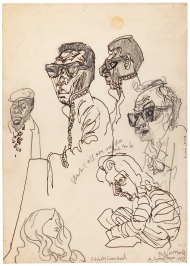 12. ‘Until all men are free / no-one can be …Ronnie Laing … Stokely Carmichael … The Round House’. Stokely Carmichael (1941-1998) Chairman of the Student Non-Violent Co-ordinating Committee calling for Black Power and the support of a global Pan-African movement and Ronnie Laing (1927-1989) Scottish anti-psychiatry psychiatrist calling for the healing of mental health problems with ‘no locks and no drugs’ together at ‘The Dialectics of Liberation’, the Round House, Camden, 15-30 July, 1967. Pencil, pen and ink. Signed, inscribed and dated, 1967. 14x10 inches. £1000

14. ‘Deutsche Democratische (sic) Republik …’ The German Democratic Republic was established in 1949. En route to Poland Topolski and his family arrived by car in Berlin on the morning of 13th August 1961 to find the East Germans barricading checkpoints to the East. A sympathetic West German policeman directed them to an unblocked street and they just got through. The DDR began to build the Berlin Wall on the 15th August. Pencil, pen, ink and watercolour. Inscribed. Ill: ‘East – West’, Topolski’s Chronicle, no.’s 16-21, vol. IX , 1961. Lit: ‘Fourteen Letters’, Feliks Topolski, no pagination, Faber and Faber, 1988. 10x14 inches. £1000 ●

15. Cuba: ‘Chinese General … Soviet delegate … Comendante (sic) Raoul Castro … Fidel Castro’. ‘…The crowds round him…at the celebracion in Plaza de la Revolucion Jose Martin … are dwarfed by Fidel Castro! The length of his speechifying conforms to his extra size- even the Chinese Generals round him (sturdy listeners )…are stunned into submission…I survive them by concentrating on drawing, but I am always amazed at the endurance of the ‘distinguished’ participants around me…’, Feliks Topolski, ‘Fifteen Letters’, no pagination, Faber and Faber, 1988. Pencil. Inscribed. Topolski was in Cuba in 1963. 10x14 inches. £1250 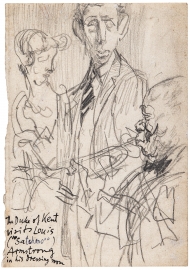 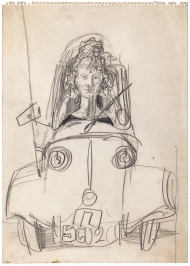 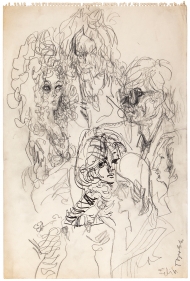 18.The End of the Evening: Andy Warhol, Ultra Violet and the artist’s daughter Teresa . Pencil, pen and ink. Signed. 1968. ‘… Dash to East 59th street poshness, filled up with ad-administrators: ballooning men and their balloon but laced women – and we, fancy troop of entertainers, walk into it and perform for TV and press cameras ‘release’: Andy, shyly determined, draws with many coloured marker-pens a butterfly on the bared thigh of homely pretty Leigh Taylor-Young – one of the essential moves to solidify her movie stardom…’ Feliks Topolski, ‘Fourteen Letters’, no pagination. Faber and Faber, 1988. 18x12 inches. £2500

19. ‘Graham Green (sic) / Cuba / Bay of Pigs’ Pencil. Signed and inscribed. Graham Greene’s ‘Our Man in Havana’ was published in 1958 and Cuba’s Bay of Pigs was unsuccessfully invaded by CIA backed Cuban exiles on 17th April 1961. Topolski met Greene, who he already knew, in Havana and they visited the Bay of Pigs ‘…a dull and basic resort with attached ‘attractions’, such as a crocodile pool…’ Feliks Topolski, ‘Fourteen Letters’, no pagination, Faber and Faber, 1988. 10x14 fragment. £1000 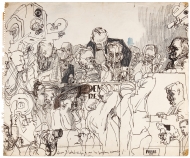 20. ‘When I looked at you I saw the backbone of America’: possibly a quote from CBS journalist Walter Cronkite (1916-2009). CBS commissioned Topolski to cover the 1952 Presidential race between Eisenhower and Stevenson. It was their first televised Presidential Election. Pencil, pen, ink and watercolour. Inscribed. 14x17 inches. £1500 ● 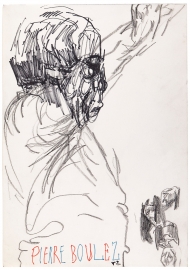 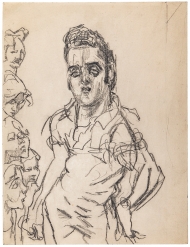 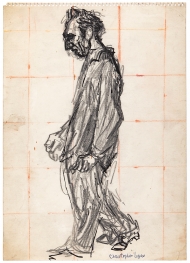 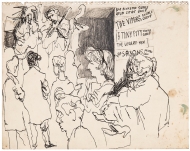 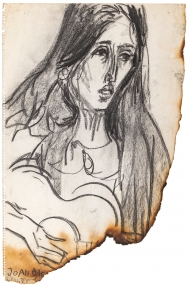 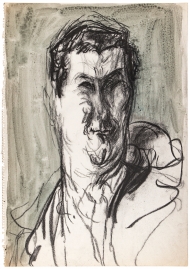 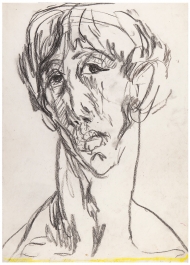 31. Philippe Pierre and Shoe at one of the Artist’s Studio Open Fridays. ‘…Round House Hippy rites I attended often. On one such Teresa and I…spotted, within the whirlwinds of the avidly exultant, a lone poseur, languidly propping his top-to-toe beauty against a pillar. His studied detachment, his glittering ultra-clothing, his dark-accented Raphaelian profile, long-black-hair-adorned – invited (surely his calculation) our advance…He was a Parisian; his name: Philippe… Not a loner at all … He positively commanded the hippy scene in London…’ Feliks Topolski, ‘Fourteen Letters’, no pagination, Faber and Faber, 1988. Pencil, fibre tip pen and wax crayon. Circa 1968. 14x20 inches. £975 ● 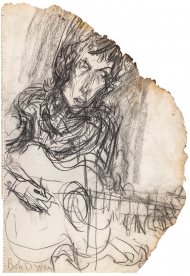 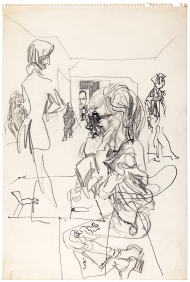 35. The Beginning of the Evening: Andy Warhol at The Factory, Union Square. ‘…unexpected shallow empty – a managerial genius amongst mirrors, glass desks, white telephones and pansy adjutants… Ultra Violet arrives and we pack (eleven of us) into a limousine …Andy as if behind a multiple mask yet an innocent…’ Feliks Topolski, ‘Fourteen Letters’, no pagination, Faber and Faber, 1988. Pencil, pen and ink. 1968. 18x12 inches. £2500 ● 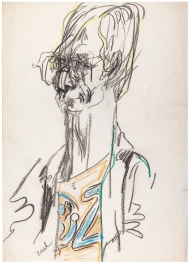 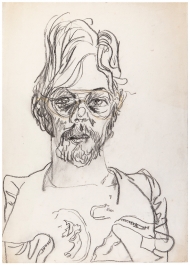