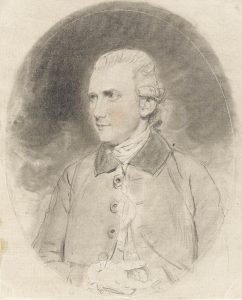 ‘I have taken the liberty of recommending to you Mr Cooper, an engraver of exceedingly great abilities, but his Works will speak his merit, having been a long while in different parts of Italy, Spain & Portugal. I am confidently assured he will be equally happy in the pleasure of knowing you as you will him, as he is a most worthy man.’ (Charles Townley (1737-1805) to Charles Rogers (1711-1784) Florence, 2nd Oct 1775).

In the 1940s Margaret Eyre, a pupil at University College London in the 1890s, and a descendent of the artist Richard Cooper Jnr (1740-1822), gave a series of Albums of the artist’s works to The National Galleries of Scotland, Birmingham City Museums, and University College London. This exhibition, for the first time, displays the Albums given to UCL alongside some from private collections, and a significant album belonging to Abbott and Holder – ‘The Cooper Album’. It introduces Cooper Jnr as an innovative print-maker and highlights some technological developments in print-making that took place in the late eighteenth-century, with which Cooper Jnr was involved.

Until recently very little was known about Cooper Jnr’s life and work. But his Albums have formed the basis of our new research, which has brought to light a talented and versatile artist. Compiled in a clear attempt to organise and preserve his achievements, his Albums provide not just an opportunity to study Cooper Jnr, but to consider artist’s Albums more broadly; how and why they are compiled and used, and the part they can place in establishing a Legacy.

This Exhibition has been curated by Tom Edwards of Abbott and Holder in collaboration with UCL Art Museum. Tom will be giving a talk on Cooper Jnr at the Museum on Tuesday 21st February at 1pm. Please contact us if you would like to come.